acres.  There are two main settlement areas about a mile apart, one at Merton Hall and the other around the Village Green, and a number of isolated farms and homesteads.   In all, there are about 50 houses and just under 100 electors.

Merton boasts a round tower 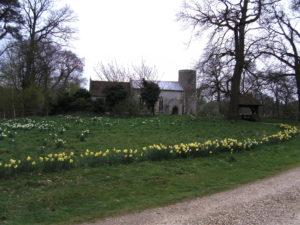 Village Hall  : The Merton Coronation Hall, as it was then known, was given to the Parish of Merton in the 1950’s by the late Lord Walsingham.  The hall is situated in the Village, just off the Green but started life in Westmere Farm and was moved to Merton Park when the battlefield area came into being.

The hall was moved to its present site in 1971, and was run successfully as a meeting place for some years.  A Charitable Trust was established in 1977, and the Parish Council are the Custodian Trustees. The hall gradually started losing money, and by the 1980’s the maintenance costs were far more than the income generated, and it fell into disuse.

One Response to Merton Parish

This website uses cookies to improve your experience while you navigate through the website. Out of these, the cookies that are categorized as necessary are stored on your browser as they are essential for the working of basic functionalities of the website. We also use third-party cookies that help us analyze and understand how you use this website. These cookies will be stored in your browser only with your consent. You also have the option to opt-out of these cookies. But opting out of some of these cookies may affect your browsing experience.
Necessary Always Enabled

Any cookies that may not be particularly necessary for the website to function and is used specifically to collect user personal data via analytics, ads, other embedded contents are termed as non-necessary cookies. It is mandatory to procure user consent prior to running these cookies on your website.